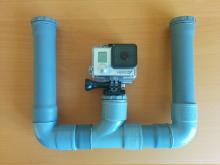 A very simple underwater mount for GoPro cameras made entirely out of PVC tubes.

R language supports importing data from JSON file/URL but couchdb views have a nested output that is not that R friendly if you only want to get the "values" part of a view.

This is a patch for gmap drupal module 7.x-2.x that will call a JS function when a marker is clicked.

Have you ever tried to route traffic across LANs connected via VPN using both PPTP and OpenVPN? Here one implementation that might prove useful.

Getting routes to be added after VPN connection is established is a bit tricky at least on some DDWRT routers.

In order to add routes after PPTP connection is established you need to modify ip-up script in /tmp/pptpd_client. The problem is that this script is generated when pptpd starts.

This module enables you to control visibility of Nivo Slider slides based on currently selected language.

A drop-down form element is added on each slide allowing the slide to be visible in one of the enabled languages as well as in all languages.

The purpose of this setup is to:

Note: This patch has been submited to drupal.org and is part of the module now.

If you need to add custom display modes in Measured Value Field this simple patch can accomplish this.

Open mvf.module and go to

This small how-to describes the installation G.729 and G.723.1 codecs on Asterisk.